Gastric Dilatation Volvulus (GDV) is also known as bloat, stomach torsion, or twisted stomach. GDV is an extremely serious condition in dogs, and should be considered a life-threatening emergency when it occurs. Bloat occurs in canines when the stomach fills with gas and fluids, dilates and twists into an abnormal position, causing nonproductive retching, a bloated abdomen, difficulty breathing, and trouble finding a comfortable lying position.

If the dog's stomach twists enough, the spleen and major blood vessels in the area twist as well. Twisted blood vessels cause a loss of blood flow to the stomach and other abdominal organs which can cause major tissue damage. When the blood supply in the abdomen's major arteries is cut off, blood flow to the heart decreases, leading to low blood pressure, and eventually, shock. In some cases, the dog's stomach ruptures from the buildup of pressure and leads to life-threatening peritonitis, inflammation to lining of the abdominal cavity.

In the surgical procedure, the stomach is decompressed (drained of the air and fluid) and rotated back to its normal position. If any of the stomach tissue has died off, it can be resected; however this carries a poorer prognosis for survival. The stomach is then tacked down (sutured) to the body wall to hold it in place to prevent re-occurrence. Occasionally, the spleen may also need to be removed at the same time. Dogs undergoing surgery for GDV are monitored for 2-3 days post operation on IV fluids, antibiotics, pain medication, and gastro-protectants.

Large breed dogs — such as German Shepherds, Retrievers, Doberman Pincers, Standard Poodles, Great Danes, or Bloodhounds — are more prone to gastric bloat. Owners of these breeds may opt to have the stomach tacked when the pet is spayed or neutered. 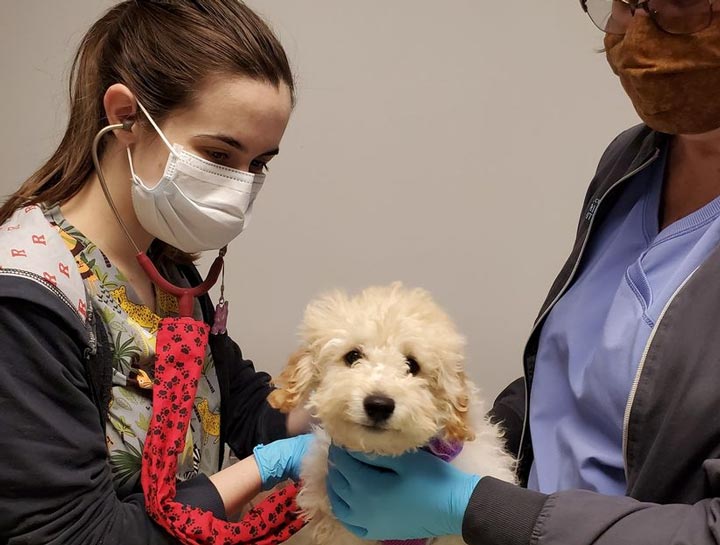